The title says it all really. I like my Stormfall Archers and they always seem to perform very well for me. These guys were the first unit I painted for my angry elves and what is good with four, is better with eight; so I’m painting up another four. 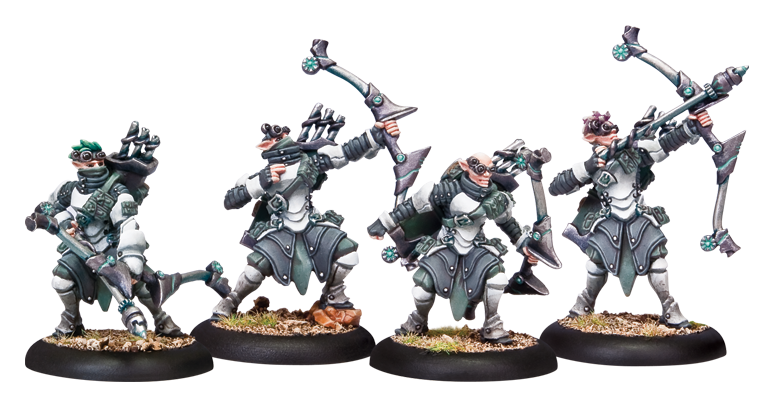 As a general  rule, Warmachine doesn’t lend itself to having multiple units of the same type in one army. This is a little different to Warhammer 40000 and is one of the things I like about the system.

In this case it is probably appropriate to consider two Stormfall Archer units as a single large unit, that just happens to have two activations. Normally my Stormfalls are my answer to high defence/low armour infantry. But with eight of them they become a very creditable threat against complete units.

Given that this type of target also often have Stealth, and as a Retribution player that scares me, it will be nice to have a more comprehensive solution to that particular problem.

And with Ossyan and Ravyn, they can really hurt Colossals or Gargantuans. Unfortunately to fit these guys into my 35 point Ravyn list I will have to remove an Arcanist and both of my Ghost Snipers, all of which are surprisingly useful; and let’s face it, Snipers are just plain cool.

For the uninitiated, Stormfall Archers are Retribution’s artillery unit. Their only role is to blow stuff up at range. While power 12, range 12″ might not look spectacular at first glance, they get three type of ammunition which happily cover some of the ranged problems elsewhere in army.

The first ability is Snipe, so that grenade tipped arrow gets to drop its lovely template up to 16″ away. Nice. Oh, did I mention that it also had a 3″ AOE? Well, it does, and it hurts those low armour high defence models than tend to have Stealth. Did I mention Retribution has a problem with Stealth?

The second ability is Brutal shot. This is one of my favourite abilities on the Black 13th Gun Mages and it is better on Stormfall Archers. The only downside is that you have to directly hit, and Stormfall Archers only have RAT 5. This makes taking on Defense 12 things, such as our heavies and Skorne Titans, err, risky. Still, this is really nice. Add in Ossyan’s feat for 4D6 + 12 damage.

The final ability I’ve only used a few times but it is always interesting. With a direct hit, a Starfire shot sets everything under the AOE on fire. Very nice for shieldwall units and casters.

Of course, the biggest reason for getting a second unit of Stormfalls done is Rahn’s new theme list from No Quarter. Advance Deploy on a unit with a 21″ threat range? Oh, go on then, I’ll take two…