As part of my challenge to practice with just three warcasters, I have started to use Lord Arcanist Ossyan, the Retribution of Scyrah warcaster introduced in the Wrath expansion.

In fairness, I did try to use him a couple of times last year, but that did not go well. This time around, with a few more tools in my army, and a better understanding of the game, it is going better.

Anyway, on to the field guide…

Ossyan’s statline does not inspire confidence. To start with the Lord Arcanist is very very killable. 15/15 for defence and armour is not great for a warcaster, and to compound the issue this particular elf really wants to be in the thick of the fighting to take advantage of his great support abilities.

His RAT of 6 always seems to surprise me as I expect it to be lower, but Ossyan’s key statistic is his Focus. At Focus 7 can be a spell slinger, but more importantly it gives his feat a large area to work on.

Despite having a very impressive looking sword, Ossyan does not want to be in melee. Ever. But it is a particularly impressive sword…

“Ossyan is a heart attack on a stick”

This caster’s two big things are his feat and his magic, in particular upkeep magic. Out of his five spells, four are upkeepable and this where he makes his money. In theory this should make him very vulnerable to Purification  however only one of his upkeeps in defensive so this is not a huge issue most of the time.

Arcantrik bolt is Ossyan’s only offensive spell. While very serviceable, becuase making making warjack stationary is nice, chances are if you are close enough to cast it, you will have bigger problems, such as not dying the following turn.

Speaking of which, Admonition helps with just that! If something walks up a bit too close (i.e. close enough to hit you with a big stick), a model with Admonition can simply move away. This is incredibly useful on both Ossyan, and any high value models such as heavy myrmidons. Unfortunately there are ways to bypass this, and if Ossyan casts Admonition on himself, he can not also use Chronomancer. However it can stop you losing a game and can create some very interesting situations.

Chronomancer has sparked some debate in the community. This a battlegroup spell allows you to spend focus to boost after rolling to hit or damage. In theory as an upkeep spell, this needs to save you at least one focus you would have otherwise spent to be worthwhile.

With list I am running, including only Ossyan himself and a Hyperion in his battlegroup, I really like this spell. In this case I want to maximise the efficiency of Focus on the Hyperion because he has multiple attacks and a potentially horrible critical effect on his main gun; and Ossyan really wants to camp any Focus he does not have to use.

The problem is you cannot have Admonition and Chronomancer on Ossyan at the same time because they are both upkeeps. For me, I prefer the slight boost to offensive potential but that means you have to be very careful not to get assassinated. This should be a theme by now…

Quicken is a great spell and one of the few ways to increase the speed of a Colossal in Retribution. There are lots of uses for this spell, but I like to use it either on the Hyperion or Invictors to get them to SPD 7. This gives these heavy hitters a nice boost, but on Mage Hunter Infiltrators Quicken gets them to SPD 9″, and that is silly. Nice.

Ossyan’s final spell is Scatterstorm, and against Hordes players this is really useful for the remove from play effect (and the extra exploding thing is nice). In one of my games four Stormfall Archers with this spell finished three heavy warbeasts denying my opponent’s warlock the opportunity to bring them back with his feat and leaving him having to cut for fury.

This one spell can help in a huge number of very difficult matchups for Retribution.

In a similar way to Kaelyssa, Ossyan’s gun, the very impressively named Chronophage Cannon, dictates how he plays. Unlike Kaelyssa’s Runebolt rifle, the Chronophage Cannon is a one shot deal, and without Phantom Hunter it is difficult for the Lord Arcanist to keep himself safe when using it.

Besides having a fairly good power itself, the Cannon’s big thing is its secondary effect. On a direct hit, a 4″ template is placed over the target and anything caught by it has its defence reduced by two, and cannot run or charge. This is a great buff because Retribution has very little that boosts its troops MAT or RAT. And more importantly it is a huge control effect. Worried about a heavy? Shoot it, and stand far enough away to avoid a fist in the face.

The flipside with the time gun is when it misses. Even with a 12″ range, this often leaves Ossyan within charge range of something nasty, and Ossyan does not like nasty things…

Gravity Well is key to how the Lord Arcanist plays, and getting the maximum out of his feat, without dying the following turn, is the secret to success with this warcaster.

When his feat is popped all ranged damage inflicted within Ossyan’s control area adds an additional die to the damage roll. This gives Ossyan a huge ranged alpha strike game and the aim is to cripple an opponent during the feat turn so they can’t come back.

The second half of the feat reduces enemy ranged damage rolls by a die. Unfortunately this tends to be irrelevant because to use his feat properly, Ossyan is normally close enough so engaging the elves in melee is not a problem.

If the feat hasn’t done enough work by then, things tend to go south pretty fast from there. This is one of the reasons the Chronophage Cannon can be so important because as an Ossyan player you need to have every shot in his feat turn causing damage.

It also important to note that the blast damage from range weapons is also affected with this feat. This means the Hyperion can have strength 9 blast damage rolling up to four dice. On average, that’s 23 points of damage which is enough to clear most infantry.

Rather than talking about synergies, I’m going to talk about matchups. Ossyan obviously wants things that hit hard at range, so Stormfall Archers, Invictors, and possibly Mage Hunter Strike Force should probably make an appearance. There is a strong argument for also taking Hypnos (his character myrmidon) for additional control, however I do not think he is necessary.

This means his prime opponents are armies including low defence, high armour stuff. In broad terms, Khador, Protectorate, Skorne, Trollbloods and Pigs all seem like good match ups for him.

And outside these, I think he can also solve anything relying on souls or resurrection (looking at you Mr Terminus and Mrs Dawnshadow), or any armies containing colossals or gargantuans.

But is he fun?

Err yes, sort of. Ossyan is a heart attack on a stick but he has a lot of tools. When everything strings together, he is uttering devastating. However even when that happens, he can trip over and get smacked in the face with surprising ease.

Now I’m getting use to the game, I like Ossyan better. And I suspect as I get better at this game, I will like him more and more.

2 thoughts on “Field Guide: Trying Not To Get Killed” 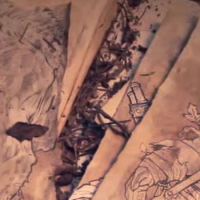 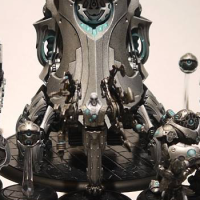 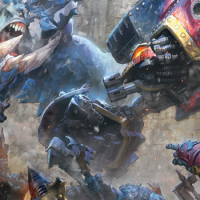 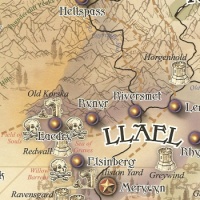