The new and very shiny Steamroller 2014 packs all landed yesterday and are available on the Privateer Press site here. 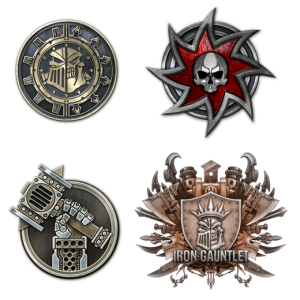 So what is new? Well, just the same as last year, the Steamroller pack is divided into different packs.

The Steamroller pack itself has all of the scenarios except the hardcore one, twelve in total, and still operates timed turns, although this can be changed with the many variants available. This format is meant as the fluffy introduction into Warmachine/Hordes tournaments and as such, provides the most options for organisers.

This year round, many of the scenarios have been altered in some way. Normally the zones or objectives are placed differently, or they are scored differently. For example, the days of scoring three control points for dominating an enemy’s flag are gone.

In addition to this, all of the objectives have been changed to armour 18 and 15 hit boxes, simplifying objectives. I approve.

I won’t comment on Hardcore, because I haven’t played it; but I think the Masters pack will be the standard for many players now, if it was not before, and I have to admit this is the Steamroller variant I like the best, if only because it has just six scenarios (so less to learn). Apart from the scenario table, which has gone a bit weird in both the Masters and Steamroller packs, and the new Scenarios; Masters is pretty much the same as last year. A case of if it ain’t broke…

A case of if it ain’t broke…

And we come to Iron Gauntlet. The big change this year is that Specialists are in. Apart from that, and being able to use any combination of casters regardless of faction, the format is the exactly the same as Masters. This is a good thing and I think it will make Iron Gauntlet the premier format that Privateer Press wanted it to be.

All in all, a very nice update of the tournament packs, and PP also uploaded printed friendly versions of all the packs which is perfect.

The next challenge will be to relearn all of the scenarios.