Despite not painting the models I already own, I have been considering a new Warmachine or Hordes factions for a while now. Both the Cygnar and the Elves are very shooty, and reasonably complex to paint so I wanted a counterpoint to these armies.

My initial thoughts had lent to Legion of Everblight because it featured dragons (and dragons are cool) and it is the only Hordes faction that really interests me, and it would give me another core mechanic to learn.

Mercenaries were also another option because many units are interchangable with my Cygnar, and I will probably build a very small merc list at somepoint. But there are few non-Rhulic warcasters I like, and we have enough Mercenary players at club. 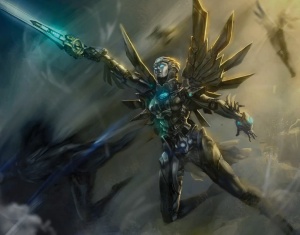 And then there is the Convergence of Cyriss…

They have lots of robots, and that’s kind of why I got into this game. All the models have an art deco feel to them, and that’s a bit of a thing for me. They have medium based heavy infantry which is new (as far as I’m concerned). And they should be pretty straightforward to paint, right?

Unfortunately large chunks of the Convergence range are missing at the moment because there are new, and they haven’t been released yet; but that has not stopped me picking up a few models and getting their faction deck in War Room.

I think I have managed to assemble some passable army lists. As an extremely synergistic faction, Convergence seem to have lots of crazy interdependences which will make them very interesting to play and should make them interesting to explore as a faction.

Visually, the art deco thing might not be to anyone’s tastes, but I like it. My plan is to go with a very simple paint scheme with these guys. This will hopefully be something where my airbrush can do the majority of the work. My aim will be to get them on the table pretty quickly.

The big things I’m missing are the heavy infantry, but the first unit, the reciprocators, are due at the end of November (that would be Christmas sorted then); the second heavy vector kit (because I want flying robots); the Transfinite Emergence Projector; and finally the last two warcasters.

In particular, I want to see Father Lucant because I think he will be the second warcaster I’m going to work on. I’m thinking very much heavy infantry, heavy vector brick with his army list. This is something very different to any of the Retribution of Scyrah armies I have been using of the past year.

So that is the crazy plan. As I’m writing this, my first Vector and a host of Vallejo Model Air paints should be on their way to Scandinavia, and once I have a few more elves painted, including the final two warcasters, I will start assembling stuff.

Having seen how many pieces Syntherion come in, this could be, err, fun…

And one other thing, does anyone else think some of the servitors look strangely similar to the droids from Terrahawks? Or is that just me?