It only took four days to get here from Blightly, but I now have a copy of the new Tau Empire codex in my paws, and you know what? I’m impressed.

Firstly the bad stuff. No getting away from it, it is expensive at £30. Actually, here it is really expensive at almost £40 with the current exchange rate. In fairness it is 40 pages longer than the previous codex, it is in full colour, and it is a gorgeous hardback book; however it seems pricey as an entrance point to an army because you need the codex.

Of course, I would (and have) happily spent this on this book because it is very very shiny, however I wonder if Games Workshop are setting the bar a bit high for new and younger players to get into the hobby.

My next rant is about two of the miniature releases attached to this launch. First, whilst the Finecast Tau Commander is alright, why, oh why did Games Workshop not make him a plastic multi-part kit? AND, that flyer kit is one of the ugliest models in GW’s entire range. Yuck.

These are two big missed opportunities especially considering the excellent catalogue of models that could have been copied from Forgeworld. All I’m saying is that a plastic Barracuda would have been awesome rather than the hugely disappointing Sun Shark. As a Tau player, I’m even jealous of the Space Marines’ flying boxes. 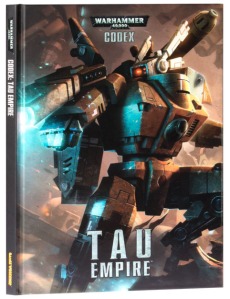 Rant over, on to the good stuff…

The fluff. I will admit I read this. Which considering I’ve read both of the two old Tau codexes more times than I care to remember, is saying something. The background is well written and adds a few nice new elements to the story of the Tau. In particular, I like the return of the Language and Culture bit. The word Fu’llasso seem appropriate considering work today. And as always, the artwork is absolutely superb.

Speaking of artwork, Raymond Swanland is now my favourite GW artist by miles because the cover art on this book is incredible. Two big thumbs up!

On page 32 we come to the Forces of the Tau Empire and all the unit entries. The new Supporting Fire special rule looks quite tasty and fits the combined arms feel of the Tau very nicely. Basically, you probably don’t want to throw a single melee unit into any Tau unit surrounded by battlesuits. It will end badly.

We only have one level of Tau Commander now however there are a lot of new, and some old, HQ options to compensate. Jeremy Velock has also had a lot of fun adding more drones which are all nice to see. Plus of course we get updated Broadside suits and the huge Riptide.

I will not go into too much detail on the bestiary and army list because I’m sure other people will post up lots about the big new shiny things, but there seems to have been a lot of small minor adjustments which I think is interesting.

For example, Fire Warriors are now cheaper and get photon grenades for free, Pathfinders have recon armour which is only 5+ which matches the models, burst cannons (quite rightly) get 4 shots, smart missile systems have a 30″ range, and pulse carbines are finally assault 2 weapons!

And the Skyray, our anti-aircraft platform, also gets the Skyfire rule. This is very sensible and to be applauded. Even excluding the new toys, Mr Velock has done a sterling job of marking all of combined arms element seem ‘right’.

In addition to all this my Fireknife Crisis suits are now 52 points each, as opposed to 62 points (or 65 point under the first codex). Taken all together, consider me one happy little blue guy general.

With the number of special rules that seem to have appeared in 6th edition Warhammer 40000, the four page reference at the back of the book, complete with page references, looks really helpful; and along the standard gallery of pretty models, completes a really nice codex.

It is a little bit of a shame that this codex has already required an FAQ, however it seems to be for minor things, credit where it is due, the FAQ was published in very good time.

Although it hurts to say it, Games Workshop have done an outstanding job. Except on that flyer…