With only a few days left of the year, I thought a review of 2012 was probably in order. Actually, this is largely an excuse for me to ramble on about nothing in particular (as if I needed an excuse) and reflect upon my first whole year living in a foreign country.

Umm, actually that really doesn’t sound right because this part of the Northern Wastelands (actually, Northern Wetlands at the moment) is now home, and I miss the place when I’m away. Strange that.

Anyway, as this blog is (mostly) about toy soldiers I suppose I ought to get back to topic. 2012 was the ‘year of the elf’ for this muppet, and accordingly I’ve painted space marines, and lots a of Iosans. At the start of the year, I was intending to build my eldar and use them. Well, some of them got built…

OK, despite having a shiny new airbrush, my Eldar project didn’t get very far. In fairness, a couple of long overdue units got built, converted and painted, namely my Rangers and jet bikes.

I’ve even built and undercoated some Warp Spiders and Fire Dragons, so I’ve made some progress.

Unfortunately the release of 6th edition Warhammer 40000 hit Eldar vehicles particularly hard with the nerf stick, so until we get a new Eldar codex, I expect the five half built grav tanks I have to remain in that state.

The Paladins of Titan

My Grey Knight army has the tag of my official backup army. They were originally built instead of me finishing my Blood Angels, and in 2012 they got dragged out when it became obvious my updated Eldar would not hit the table.

This year they gained just enough to make them competitive under the 5th edition rules, namely the unit of purifiers below and Inquisitor Coteaz. This was handy as I took them to my only tournament of the year. They put in a respectable performance, only losing to the army that won the event.

However, with A Small Matter of Honour out of the way my Grey Knights were put back on the shelf, so err, moving on…

I have played a lot of Warmachine/Hordes games in the last twelve months, far more than I’ve played of 40K. However, I have only used the angry elves since moving here.

This means I have made significant progress on my Retribution of Scyrah army. I have even learnt how to use it. Sort of.

What was original going to be a 15 point force has, err, grown. So much so that it no longer fits in just one GW figure case, which is a little annoying.

Still, I think a have a passable Kaelyssa 35 point list which is ready to rock, although I need a lot more practice with it. Rahn was going to be next, and I’ve just finished the Battle Mages specifically for him; but I’m also close to having my Ravyn list completed.

Whatever gets painted next, I’m still really enjoying Warmachine. And when I get bored painting elves (which will happen), I’ve got three new Cygnar warcasters to do, and quite a few other bits for my ‘primary’ Warmachine army.

It should also be noted that after getting a suitable kicking from the boss (ie the wife), I’ve also got around to joining a local gaming club this year. Despite not getting there anywhere near as much as I would like, it’s been a fantastic experience meeting new players and learning a completely new gaming culture.

If work and family life are little more forgiving in 2013, I will be at SPIF a lot more. In the meantime I have booked a local tournament and I am painting when I can.

Well, I’ve got at far as buying Infinity and a handful of Yu Jing models. One of my missions for 2013 is to get these painted and play some games. I might even find some time to properly read the two rulebooks I have, although that might be a little optimistic as I still haven’t finished the Pratchett book I started in the summer.

Now Christmas has come and gone, I also have a few more toys to assemble, including one of Colossal proportions; which will almost certainly be an airbrush project. It probably should be mentioned I have some unassembled toys from last Christmas. And also from the year before that.

On the plus side, the A Wing fighter my eldest gave me this year got built on Christmas afternoon. Got to love Lego!

Anyway, a hope Santa bought everyone what they wanted and I hope everyone out there has a Happy and Prosperous New Year! 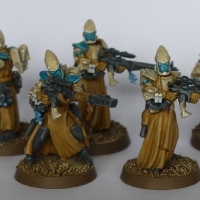